This year marks the 100th anniversary of Villa René Lalique, the former home of the renowned glass designer René Lalique. We were lucky to be invited to stay this tiny six-room hotel that is filled with Lalique pieces, and where quality rules over quantity.

Born in 1860 in a small Champagne hamlet, René Lalique studied at the Ecole des Arts Decoratifs in Paris and first worked in jewellery design before moving onto glass. In 1920, at the peak of his career, he commissioned the grand villa in Wingen-Sur-Moder, close to where his factory was based. His son Marc took over after his death in 1945 and in 1977 it was Marie-Claude, Marc’s daughter who took over the company. She retired in 1984, sold the company, and Lalique crystal glass fell out of favour leaving the company and with it the villa, in decline. The villa was in a state of despair when Swiss oenophile, and Lalique collector, Silvio Denz bought the Lalique brand in 2008.

Denz’s decision to turn the villa into a small five-star hotel with a restaurant was quite the audacious thing to do. He wanted to keep the character of the villa while turning it into a restaurant-hotel and has succeeded in doing so. Situated on the edge the Vosges nature park, and surrounded by forest, the villa is a typical Alsatian timbered house complete with classic blue shutters. Juxtaposed to the main building is a contemporary glass cube (with a plant covered roof) designed by Swiss architect Mario Botta which houses the two star Michelin restaurant.

With only six rooms available, Denz was keen to convey a cosy and homely atmosphere, and maintain a familial feel as the villa was refurbished. René Lalique’s three sources of inspiration were: “la Femme, la Flore et la Faune” and are all reflected in the rooms. Every room is unique, and they each bear the name of an emblematic René Lalique creation that harks back to a decade in the life of the master glassmaker. Les Hirondelles (The Swallows), situated on the first floor, was Lalique’s own former bedroom. Another bedroom is called Dahlia and the largest suite of the villa is named after Lalique’s panel called Masque de Femme, which embodies all of the glassmaker inspirations.

Silvio Denz called in the help from Lady Tina Green and Pietro Mingarelli, the designers and manufacturers of the collection of furniture, decorative accessories and fabrics known as ‘Lalique Maison’ to transform the declining villa. The design duo respected Lalique’s Art Deco heritage by using a classic palette of lacquered beige, black and blue throughout the villa, and (Lalique lovers take notice) used lots of Lalique ornaments. Even the speakers in the rooms are from the glassmaker’s brand, made in collaboration with French electronic music legend Jean-Michel Jarre. The walls are adorned with pictures of the moustachioed Lalique and his family, lending the villa a personal and intimate touch. Breakfast is served by the Head of Housekeeping Murielle (who could be everyone’s favourite aunt) in a room with a beautiful oak leaf chandelier. The lounge has a small bar and a display cabinet filled the unique carafes that Lalique developed in tandem with other great brands such as The Macallan whisky, Hardy and De La Tour cognac and Patrón tequila.

Night is when the contemporary part of the villa comes to life and where the art happens. After dark, the illuminated trees surrounding the glass enclosed restaurant create an enchanting dining environment which accentuates the gastronomic experience. All your taste buds are about to get challenged with the help of Michelin starred chef Jean-George Klein and his almighty army of fifteen chefs. Previously at a three star restaurant not far from Strasbourg, Klein was snapped up by Denz and within three months of opening the restaurant in 2015 he was awarded two stars. In October 2019, the Austrian Paul Stradner, the previous two Michelin-star chef of Brenners Park Hotel & Spa in Baden-Baden, joined Jean-Georges Klein.

We had the Creation Menu, a 10-course tasting menu which took us on a 4.5-hour journey of Klein’s creations. The name of the dishes are no more than a simple description of the dish yet little pieces of art arrive in front of you and for just a nanosecond there is a hesitation as to whether to eat it or admire it just that little bit longer. Diners are surprised with dishes such as Blue Lobster with Piña Colada Flavours or classic French Snails with wild garlic and sweet but tangy tangerine sorbet.

The wine accompanying each dish are chosen by head sommelier Romain Itis, who in 2012 was awarded Meilleur Sommelier de France and in 2015 Meilleur Ouvrier de France. He is in charge of the impressive 20,000-bottle wine cellar. His choice of wines is heavily influenced by his background in cooking, allowing for excellent matches and he wears his love for Alsatian wines on his sleeve. The cellar is a shiny piece of work, on your way to the cellar stop and look at Damien Hirst’s butterflies in Lalique glass.

We had the rare opportunity to visit Lalique’s factory, still in the same place where it was originally built. The factory is divided in two sections, the hot one and the cold one. The hot one is where the glass is molten and blown into shape. In the cold section, the products are scrutinised for flaws. Any piece with a bubble or crack will be eliminated. Also situated in the cold part of the factory is the finishing studio. The detail work on the designs happens here using precision tools. Each product is handmade and over the years many artists have collaborated with Lalique including such famous names as Damien Hirst, Han Meilin and Arik Levy. In 2018, the nearby Musée Lalique set up an exhibition in honour of Yves Klein, a leading member of the French artistic movement of Nouveau réalisme. Among the artists who created an object were Anish Kapoor, Terry Rodgers and the late architect Zaha Hadid. 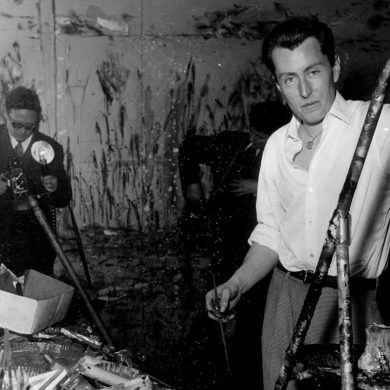