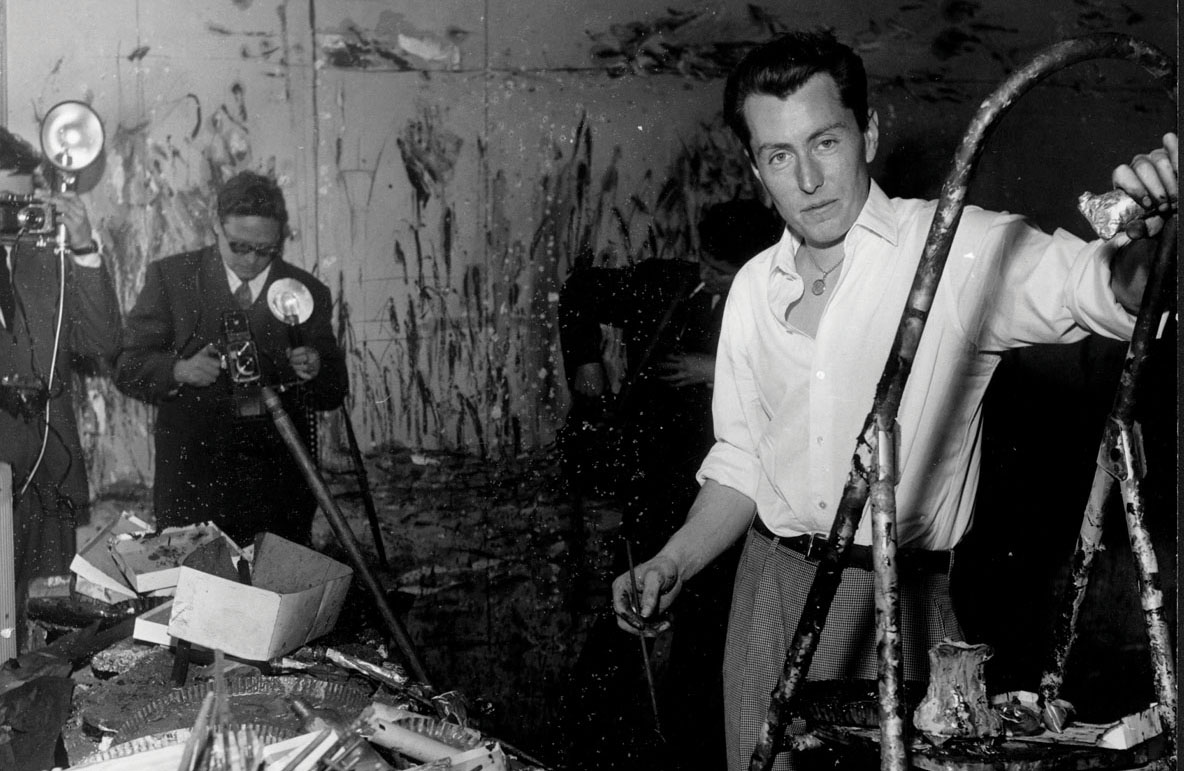 Bernard Buffet at work in his studio © Alamy
Art In...

Bernard Buffet’s work brought him early fame and fortune but no lasting critical esteem.  Stephan Wrobel, an avid collector of post-war art, believes there is a growing realisation that Buffet’s work deserves more attention and a closer appreciation as he feels Buffet is one of the key figurative painter of the second part of the 20th century.

Born in Paris, 1928, Buffet studied at the Ecole des Beaux-Arts in Paris. He broke through the pack early and had his first solo show in Paris in 1947. More success followed in 1948, when, aged 20, he was awarded the Prix de la Critique; an award he shared with Bernard Lorjou, a much older painter. Buffet’s style fused sombre colours and dark lines to depict his main themes of loneliness and despair. This resonated well in post-war Paris which was in the grip of an existentialist wave, a philosophy that highlights the isolation of the individual experience in an indifferent or even hostile universe.

By the early 1950’s Buffet’s commercial success transformed him from the classic starving artist in a garret to one with two Rolls-Royces and a 300-year-old chateau in Provence, which he shared with his then boyfriend Pierre Bergé. Buffet became the focus of magazines, and the media couldn’t get enough of him and his St Tropez friends, which included Yves Saint Laurent, Roger Vadim, Françoise Sagan, Johnny Hallyday and Brigitte Bardot. However, by the sixties he was mocked by the French art intelligentsia, despised by the French public for his lavish lifestyle and rejected by the then Minister of Culture, Andre Malraux, who was committed to promoting abstract art. Buffet, by then married to the writer Annabel Schwob, dropped out of the public eye although he remained incredibly productive. He maintained a phenomenal output throughout his life and is said to have produced 8,000 canvasses. He committed suicide in 1999, aged 71 and diagnosed with Parkinson. Unable to paint, unable to express himself in the medium he loved, he opted for a different course.

With three shows in France in 2017, Buffet seems to be making a comeback to a fresh eyed audience. I spoke to Stephan Wrobel, founding partner of Diapason Commodities & Currencies, and an avid collector of post-war art (both figurative and abstract). He is more than a Buffet enthusiast; he regards Bernard Buffet’s work as the backbone of his collection. A few paintings from Wrobel’s collection are currently on show at the MAM in Paris and Galerie Diane de Polignac.

How did you get into collecting Bernard Buffet?

I started collecting art from the post-war period in my late twenties. One day, strolling down the streets of Paris, I came across a Bernard Buffet show in the historical Galerie Maurice Garnier  (which is still open to this day)  in Paris called “Jeux de Dames”. I thought this was very interesting, yet at that time nobody was interested in Buffet which I did not understand. I started doing research and finding out more about his work. I really connected with him, really enjoyed the different periods of his work his subject matter, plus I liked the way he painted and the way he was dedicated to his work. His craftsmanship was amazing so I started collecting his works. The more I collected his work, the more fascinated I became. After that, I started to meet the people around him; art critics, the galleries, authors, museum curators and dealers. It was a natural progression.

How many of his paintings do you have?

I have several from the 1940s to the 1960s.  In the 40s his work was very minimalist with a lot of black lines. I really like his work from that period. I have a little canvas that he did from that period. It has a lot of grey, brown, green light blues and yellow, which I find so subtle. But he was always evolving. In the mid-fifties he still has a minimalist trait but then suddenly colours appear. I like the colours from later periods in his life. In the 80s he painted really well with colours. In every year, or period, you can find something you can like. You find something different. People tend to say he always painted the same, but I do not understand that. Most probably they have not looked at all his work. That has been one of the things that bothered me – the entirety of his work has not been very well presented. He is well liked in Asia, where he has his own museum in Nagaizumi (Japan) and is now starting to be well presented in New York, London and Paris. I am pleased that there is a retrospective of Buffet’s work in France so that he is shown in his own country. The MAM, with head curator Dominique Gagneux, presented a wonderful retrospective with many works never seen before.

Has your taste in Bernard Buffet changed over the years?

Yes, it evolves constantly. I evolved with him in a sense that as I found out about the different periods, I saw the genesis of the work. I understood better why he did this or that at that point and it sometimes made me reassess some pieces. Maybe at first I didn’t find it appealing, but as I knew more I started to grow into it. For me, collecting is not something fast. I am not chasing anything. It is a slow process, and it’s at a slow pace. I enjoy that it is slow. I like taking my time. I am not in any rush. I like to see the paintings, and then see them again before I buy. Question what I think about them. Sometimes this is a problem. At auctions you have to make a snap decision. Sometimes at a dealer, you may like a painting but when you come back it is gone. I like to live with paintings when I can. I live with a few of my Bernard Buffet paintings and every day I get to experience them. I like to think about a painting. I do most of the research myself. I like to read the books, documents, newspapers and magazines from that time. It is fascinating to understand everything that surrounded the painter in that period of his life. I don’t use art advisors. I like to do the work myself, meet with the galleries, art critics, authors and the people involved when I can. I also try to get involved with museums. The point of collecting is also to develop a creative relationship with these people because they do work around the body of work of the artist. They think about it, try to put it into perspective and they research it. That is the fun part of collecting for me.

What is your favourite Bernard Buffet painting?

The self-portrait done in his studio in 1952. I have lent this painting to the Paris MOMA for their Buffet show. I really like that one. It’s a large format piece, 2 meters by 2 meters. There is a strong touch of humanity in that picture. There is sensibility. He has his left hand on his heart in a very El Greco-like manner. It is as if the artist is questioning himself, wondering what he is doing, who he is. I find it a very honest, direct and human painting. Buffet actually is a great human painter. He does have a strong sense of humanity. To have a picture of the painter in his atelier, the place where the creation takes place, is fascinating. The atelier is in his house in Nanse, in the middle of nowhere, 17km from Manosque, where he was living, from 1951 to 1954, with Pierre Bergé. He was living away from the agitation of the world and regularly visited his friend, author Jean Giono. During that period, he painted a lot of great works.

I have a few Buffet self-portraits; they are fantastic. The paintings fill up with so much humanity and drama. His later works offer a much better balance between composition and colours. And when you see the portraits he did of Annabel from the sixties you know he is madly in love with her. They are very feminine and sensitive, the colours, the light blue, the beige and the pink, you can feel that he is in love with her. She is his muse. And when he had problems you see his suffering in his painting. If you look at the paintings when he faces questions in life and when he approached death, you can actually feel them throught the canvas. I think he was one of the great painters of the 20th century, a unique talent, some call him a genius. He was able to translate his feelings onto canvas with a very personal style.

The Italian critic Roberto Longhi once said that great painters link to the past and also link into the future. When you see Bernard Buffet you see a link with pop art and street art. Buffet is also very easy to mix with contemporary art. There is a link. Picasso broke the rules of art but Buffet is a continuation of the tradition of great paintings. It can not be about undoing all the time. Buffet has his own style, it is the Buffet style. He kept the  tradition of painting alive while many artists dropped their brushes. He never stopped, he continued painting. Contrary to what critics say, I think there is a lot of variety in his work but he always painted in his style. You can always recognise it is him.

Where does your strong interest with  Buffet come from?

His style is unique, it catches you and never leaves you. In his life he didn’t make any concessions. His son Nicolas Buffet said (in the documentary Bernard Buffet, The Great Agitator) that his father was married first to painting, next came his family. He used to say that, “If you make concessions, you’re finished.” Buffet didn’t. If you were around him, that must have been difficult. But this attitude and dedication is exactly what kept the quality of his paintings so good. He had it in his blood. He was possessed. He had a gift and he expressed it. If he didn’t paint, he didn’t feel well. He said of himself that he was a painter, not an artist, someone who works with his hands, a manual labourer. He wasn’t an intellectual, although he was very knowledgeable. People around him said he was always on top of his game. He knew the major painters and the minor ones working at the same time. He knew the Louvre inside out. He was very knowledgeable in terms of history of painting. You can find references to masters such as Quarton, Callot, Goya, Durer, El Greco, Rembrandt, Velazquez, Watteau Gros, Delacroix, Courbet, Van Gogh, Degas, Douanier Rousseau, Picasso, Giacometti, Dix or Gruber in his work. It is endless.

His suicide, in a way, is very beautiful. It is theatrical and part of his “oeuvre” At the end of his life, the series he painted about death is phenomenal. They are very powerful and stirring paintings.

What is in store for Bernard Buffet in the future?

Little by little, a lot of things are coming out about him. Buffet is getting more attention, he is like flowers blossoming. It’s like spring again for him. It is a beautiful story.